The leader of the Columbia Unit Crew, he agreed to meet for an interview over breakfast at 9 a.m. the morning after returning from a gruelling two weeks on the front lines of the raging wild fire near the villages of Ashcroft and Cache Creek.

“All I want to do is sleep,” he told me after showing up 40 minutes late, and only after I woke him up with a phone call.

I didn’t blame him. He and his crew had just completed 14 days of intense work limiting the damage caused by the Elephant Hill fire (it was originally known as the Ashcroft Reserve fire).

The fire started on Thursday, July 6, and by the time the Columbia crew arrived Sunday morning, it was already about 3,000 hectares and growing.

When the fire started, the Revelstoke-based crew was stationed in Castlegar, where the fire hazard was higher than at home. On July 8, they were told to go to Cache Creek; they left the next morning and got to work.

“Rolling into town you could see where the tankers had dropped retardant,” said Gow. “It was quiet, the town had been evacuated.” 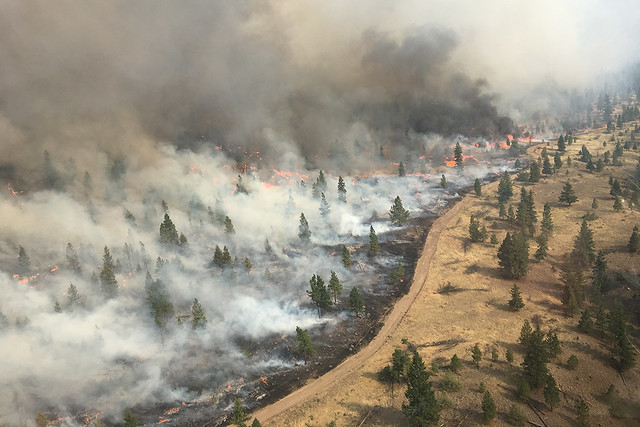 The fire was spreading quickly through a dry grassland and timber, but there weren’t a lot of crews available because of the sheer number of fires that had sprung up in the province the previous few days.

“That was a tough part for sure — not having as many people as you want to get things going,” said Gow.

Gow, a former competitive swimmer and a ski patroller during the winter, has been a firefighter for seven years and he said he’d never experienced conditions like this. The ground was as dry as it gets. “If you were to have a campfire, you wouldn’t need kindling,” he said. “You could light a log with a lighter.”

The unit crew was dispatched right away to stop a part of the fire that was threatening Highway 97. They were able to hold the fire back — the first of many small victories against a blaze that was raging out of control.

From there, the crew was tasked with protecting the highway and homes in the area. They worked on building fire guards to prevent it from spreading beyond certain points. With hand tools, they cleared away any fuels to create a metre wide gap, and then burned away the fuels in between the breaks and the fire.

“Everyone gets in a line and you leapfrog each other and keep going and going,” said Gow. “(The fire) meets your guard and there’s no more fuel and the idea is it stops there.” 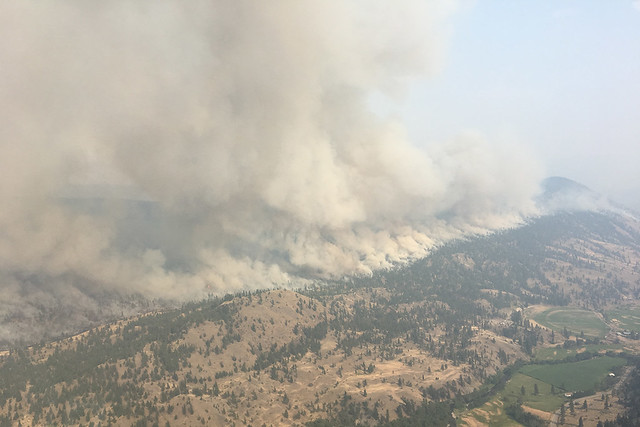 It’s easy to picture wildfire fighting as a crew of men and women on the lines, with towering flames engulfing the trees in front of them as they battle to hold them back. In reality, on a fire like this, safety dictates the crews stay away from the main column of flames and instead fight on the periphery, creating guards to protect homes and infrastructure.

“The nature of a fire like that, as much as you want to stop it, you can’t go anywhere near it,” said Gow. “You work the tail and the flanks and in that situation, with that kind of growth, we’re more or less trying to steer the fire away from the highway.

“We were trying to open up Cache Creek again. That was priority number one.”

Days for the crew would begin at 7 a.m. and end anywhere from 10 p.m. to midnight. They were housed at a camp, got up for breakfast and walked out the door to drive to their position — hauling in as much drinking water as possible. They would return at nightfall, eat dinner and sleep.

After last year’s wet summer, for many on the crew it was their first fire and Gow said he was proud watching the 20-person team grow and learn as the days went on.

“It takes one fire to wrap your mind around how things go, the routines that we do, be thinking about safety, the small tasks that need to get done,” he said. “On a fire like that, our crew has grown a lot and I’m stoked to get out on the next one to see how everybody does.

“It’s really cool to see a crew grow through a summer, seeing individuals get better and how that effects a 20-pack machine.”

The fire hasn’t stopped spreading over the past 20 days. As of Tuesday afternoon, the BC Wildfire Service said it had burned about 61,500 hectares and was only 30 per cent contained. 241 firefighters, 14 helicopters and 59 pieces of heavy equipment were on scene. 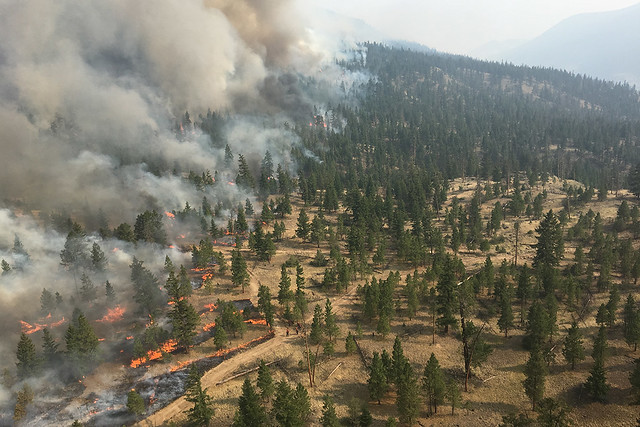 Despite that, Gow said there were victories. On one occasion, his crew was able to protect a small settlement of homes from the encroaching flames. When Cache Creek was opened up again, that was a victory for everyone.

“When you hear the town you’ve been working to get people back into has been (opened), you can’t help to feel good about that,” he said. “As much as getting people back into Cache Creek is a win for the whole operation, I find for the squads and the individuals on the crew, it’s about protecting that one house you’ve been going back to day after day.”

The crew had three rest days before going back to work on Wednesday, July 26. Gow didn’t know where they were going. As of Tuesday afternoon, there was 154 wildfires burning in B.C., including 22 of note, and twelve new fires were started on Monday. Evacuation orders were rescinded for several areas, including 100 Mile House, but more than 20,000 people were still displaced, including the City of Williams Lake.

Despite the challenging conditions, long days and exhaustion, Gow said he wouldn’t want to do anything else.

“As much as I like being outside and getting dirty and working with a great crew, it’s when you’re working on incident that is this close to British Columbians and you’re able to help them — whether its floods or wildfires – it’s so rewarding.”